Rakudai Kishi no Cavalry: Will There Be A Season 2? 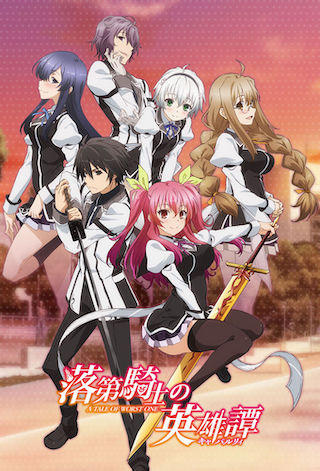 Perhaps you know that Chivalry of a Failed Knight light novel series was sold in Japan with 1.8 million copies. However, a television adaptation was not so much impressive in sales. The first season of the anime series came to an end on December 19, 2015.

Since then, numerous fans have been trying to figure out whether or not Silver Link/Nexus is going to produce one more installment. Unfortunately, there have been no official words about Season 2.

However, we can now think a bit about it in an attempt to learn is the next season possible at all? As usual, there is a variety of factors capable of affecting the decision on renewal.

There is a curious discussion on the subject on MyAnimeList. According to the opinion of a majority, there can't be any next season. In general, most of them were right, in particular. However, are the odds so bad?

We admit that the primary indicator which can affect the decision of the show's creators is the commercial feasibility. Filming of any anime series is quite a costly process.

As a result, the producers must cover expenses, first of all. In Japan, this indicator mostly depends on the BD/DVD sales. In fact, there were about 2K-2.5K items sold a week, that is not too bad, isn't it?

Maybe these figures are not impressive, but they are not so much low, frankly. Thus, there is no reason to disturb. The show's creators have covered their expenses at least.

The next point in the discussion is a reception by the target audience. Again, it was pretty impressive. Rakudai Kishi no Cavalry Season 1 has a score of 7.76/10 ~ 159,000 on the same MyAnimeList. However, this indicator is not valued so much in Japan.

Nevertheless, it plays its role overseas. Moreover, this figure reflects the real demand of the viewers. Even on IMDb, we see almost the same number, 7.5/10. Isn't it a success? Any series in the US which holds the same rating or closer to this figure is considered pretty prosperous. The statistics can't lie.

No matter what a particular viewer/fan thinks. The more valuable is what all the viewers think. Thus, the response of the target audience is one more indicator in favor of renewal.

Finally, there is another factor, which also plays a significant role. Rakudai Kishi no Cavalry has its root in a light novel series consisting of twelve volumes.

Additionally, there are eight volumes of the manga adaptation. Both sets are currently ongoing, as well as the entire franchise. For all this, the first season of Chivalry of a Failed Knight had only twelve episodes. As a result, we have enough source material to produce at least one more season.

Of course, there is one more point, a logical conclusion. However, this factor is doubtful since some fans think that the story is complete while the rest believe there might be some continuation of the story. Both sides could be right. However, the final decision depends on Silver Link/Nexus.

Summing up, we still believe that Rakudai Kishi no Cavalry Season 2 can happen despite all the different versions. After all, the facts presented above have quite a solid base in the form of statistics. Therefore, we think that the odds are very possible.

Nonetheless, this is just our assumption, because there is no official news on the subject. To be sure of this, we suggest you visit the official website of the anime series. But we are ready to listen to your opinion. Please leave your comments below.

Chivalry of a Failed Knight premiered in October 2015 on AT-X. Subsequently, Tokyo MX, BS11, TVA, and other Japanese broadcasters began airing the series. Silver Link alongside with Nexus served as the developers of the television adaptation. Sentai Filmworks has acquired the exclusive rights to the anime in North America.

Season 1 of Rakudai Kishi no Cavalry consisted of twelve episodes came to an end on December 19, 2015. Since then, there have been no official reports on the subject of Season 2.

The story unfolds in the parallel universe, where humans with supernatural capabilities called "Blazers" exist. Their primary ability is to control a weapon called "Device" which is a derivative of one's soul.

All these gifted people attend the prestigious Hagun Academy, where each of them has a chance to perform his skills within an annual tournament. Their goal thereby is to become one of the Mage-Knights.

The primary storyline focuses on Ikki Kurogane, the only F-rated Blazer due to his weak magical abilities. One day, Ikki was unlucky when he saw Stella Vermillion, an A-ranked Blazer being almost naked.

As a result, Stella challenged Ikki to a duel. The rules were pretty simple, the one who will lose in the tournament becomes the slave of the winner. It seems that Ikki has no chance to win. The story thus describes Ikki's attempt to prove his significance, being the weakest among the strongest.

As mentioned above, we don't rule out the possibility of Rakudai Kishi no Cavalry of returning for Season 2. A well-known fact is that just a few of the anime series updates regularly. Most of them go on a long-term hiatus before getting a new installment.

In general, the odds are strong, given all the facts presented above. But no-one knows the future for sure. Neither Silver Link nor Nexus doesn't hurry up with the announcement of renewal.

It's evident that Chivalry of a Failed Knight won't return for Season 2 this year. However, maybe 2020 will be more successful for this anime series. We are eagerly waiting for the official announcement.

And of course, we'll inform you about the long-awaited official news as soon as possible. Stay tuned for updates. We'll keep you informed. Feel free to leave your comment. Your opinion is significant for the entire fandom. Perhaps, you have some additional data to extend our forecast and provide help to all the fans thereby.