When Will Preacher Return For Season 3 on AMC? News, Cast, And More 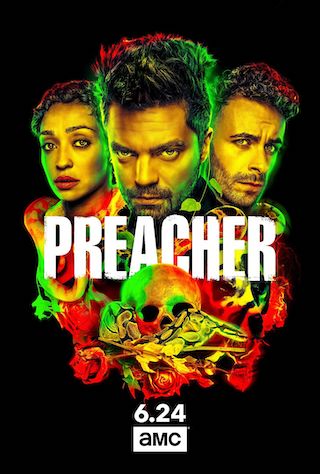 As a rule, if some TV project has its roots in a novel or comic book, in most cases, it has a good chance for a new season. Preacher on AMC is an excellent example of such kind of show, which, besides has received the universal acclaim. Therefore, nothing is surprising in the fact that AMC opted to renew Preacher for Season 3 last October. The decision, however, first appeared on the Seth Rogen's Twitter page. Thus, AMC has yet to announce the exact date for a next season. In fact, this is not so difficult to predict the release date. We will discuss this subject below.

Now we want to pay your attention to some significant indicators that affected the decision by AMC. First of all, the second season of Preacher was a success in the ratings. The season's premiere has garnered 1.693 million viewers (-29%) with a 0.58 key demo (P18-49). Though this figure is inferior in comparison with those of Season 1 (2.38 million), the viewing audience is appropriate for the second season on a cable network. It seems that AMC mostly relied on the response from critics and viewers. In fact, both were satisfied with the 2nd installment of Preacher.

Indeed, the reviews by the target audience were impressive. On Rotten Tomatoes, the second season of Preacher has a score of 7.67/10 and a 90% approval rating among critics, while the viewers have evaluated the 2nd round of the show at 4.2/5/84%. On Metacritic, the statistics look favorable as well, 76/100 and 7.8/10, among critics/viewers, respectively. An overall score of Preacher on IMDb is 8.1/10 > 47,000 votes. Without a doubt, AMC gazed at these data before making their decision on the future of the black comedy.

Summing up, the destiny of this show was predictable. AMC's Preacher has a lot of source material for this show is based on the eponymous comic book series; the show's ratings were steady within two seasons; this television series has an immense fandom and excellent reception as a result. So, if the viewing audience of the black comedy won't drop below 600-700K viewers per episode in Season 3, we'd have a chance to watch the next season of Preacher in the foreseeable future.

What Is Preacher About?

If you have not yet watched this black comedy on AMC, please read a brief overview of Preacher below.

The story focuses on Jesse Custer, a small-town preacher, who has recently been an outlaw. Jesse comes back to his hometown with an intention to take over his dad's church. However, Jesse's mission soon becomes devilish after a mysterious force overcomes his body. Thanks to the supernatural abilities obtained thereby, Jesse is now capable of forcing others to do as he says. Thus Jesse embarks on a mission to discover God, assisted by his ex-girlfriend named Tulip and Irish vagabond Cassidy.

On February 13, 2018, AMC announced that Betty Buckley joins Preacher in Season 3. She will portray "Grandma," a medium who is capable of bringing back dead for money. Colin Cunningham will play "TC," a loyal soldier to Grandma. Jeremy Childs acts as "Jody," the only man who is unbeatable for Jesse. Liz McGeever will portray "Christina," whose mission is to lure more customers for her family business and protect her child.

About The Likely Release Date For Season 3 Of Preacher

The production of the third season started off in February. As a result, we doubt that Preacher might return for Season 3 earlier than in this fall. However, we don't rule out the summer premiere, relying on the current schedule of the series. After all, the previous seasons of Preacher kicked off in May and June, respectively. Therefore, July of 2018 is also the possible release date for a third installment of the show. In any case, we are looking forward to the official announcement by AMC. We will update this page as soon as we have more data from AMC.

Next Show: The Mick