Do We Need To Expect Nisekoi Season 3 This Year, Or Rather in 2020? 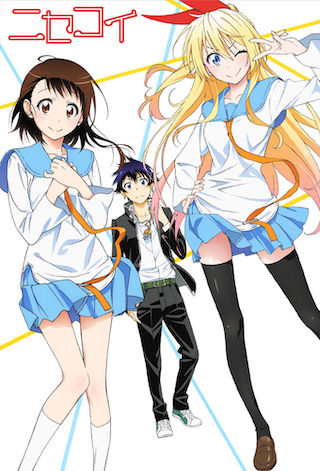 The romantic comedy anime Nisekoi was a success within two seasons. But what's happening to the series right now? Why the series' creators don't hurry up with the announcement of renewal? Season 2 of the anime has come to an end yet in June 2015. Two years have passed since that date. Whether or not the fans must wait for the next season of Nisekoi, and how high the odds?

Despite numerous rumors, there has been no official news on the subject of Season 3 of Nisekoi. If you want to be sure of this, we suggest you check both US and Japan versions of the official website of the series. None of them contains any information concerning renewal. So, is there going to be the third season of the series or not? Let's try to figure out.

Nisekoi debuted on January 11, 2014, on Tokyo MX. Later, MBS, BS11, TVQ, and other Japanese stations began to broadcast the anime. Season 1 of the series has received praise from the target audience. It holds a score of 7.85/10 ~ 243,000 votes, on MyAnimeList. We consider this indicator pretty high. The first season concluded in May 2014. But already in April 2015, another season titled Nisekoi: appeared on the small screens. The second season has been praised by the viewers as well. However, the season managed to gain just 7.50 points of out 10 ~ 137,000 votes. Since June 26, 2015, Nisekoi is on hiatus. Unfortunately, it's a widespread practice to keep silence for years for any Japanese studio. Shaft, Inc. is no exception.

The original manga contains twenty-five volumes and 229 chapters. There is enough source material to produce one more season. However, the bad news is that it is not updating as well as the series of light novels. Shueisha stopped issuing the manga in August 2016. Nisekoi: Urabana concluded on December 28, 2013. It seems that the entire franchise has come to an end. The last tweet published on the official Twitter page of the series dated December 1, 2016. However, it's worth noting that the Japanese Twitter page is still updating. Does it mean that this is the end of the Nisekoi franchise? Of course, it is not. We still must keep hope.

Nonetheless, this is an unfavorable signal that we don't have any official news from the creators of the anime. Another sad thing is that Season 2 of the series consisted of just twelve episodes, which is less than its predecessor. Season 1 of Nisekoi contained 20 episodes. Apparently, the studio Shaft felt the lack of the source material while creating the second season of the series. In any case, we will have to wait for the official announcement. The only question is how long?

What Is The Series About?

The story centers on Raku Ichijo, a high school student who must come to terms with his Yakuza background. In his boyhood, he confessed his love to a girl. The only thing remained from their relationship is a pendant with a lock, which he wears on his neck. Now, a teenager, he must attend school, like other classmates. But one day Raku loses his pendant when stumbling upon Chitoge Kirisaki, a female transfer student from America. She later assists Raku in searching for the pendant. As a result, they become closer.

As turns out, Chitoge belongs to another mafia family. Their parents decided to team up the offsprings, hoping to improve the relationship between two feuding families. But the kids hate each other. It's a difficult task to simulate their love. Besides, Raku fell in love with Kosaki Onodera, his classmate. Aside from Raku, Chitoge, and Kosaki, the anime is full of other remarkable title characters.

Should We Expect Season 3?

Honestly, this is a complicated question, given the data presented above. Of course, we must keep hoping. In the world of anime, we rarely receive good news. Some studios go on hiatus for a long time. However, there are good examples, nonetheless. Code Geass is just one of them. Though renewal is unlikely, we're tracking down the official sources hoping to inform you about the exciting news. But, sometimes, this lasts for years. Stay tuned for updates. Perhaps, soon we might make you happy.

Do you think Nisekoi Season 3 still could happen? Do you have some confident source confirming this fact? Be free to leave your comment on the subject. Maybe you'll able to assist the entire fan community with your information.