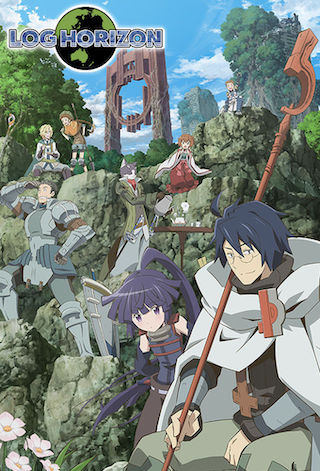 We know that you're looking forward to Log Horizon Season 3, yet you weren't able to find any reliable data on the subject. The 2nd season of the anime concluded back in March 2015. No doubt, many years of waiting were tedious for any fan of the series. There are plenty of rumours and doubtful information on the subject of Log Horizon Season 3 that are spread across the Internet. Since we used to provide our readers only reliable data, we would like to explain you what truly happened to the anime, and whether there will be another round of the Log Horizon anime.

On April 27, 2016, ANN published news about Mamare Touno (Daisuke Umezu), the author of the Log Horizon novel series, who, according the report of NTV News 24, was convicted of tax evasion. As a result, Daisuke's company was fined for Â¥ 7,000,000, and he, thereby, is sentenced to spend 10 months in prison. The author was placed under house arrest yet in December 2015. This report has been spread in the media outlets. Eventually, many journalists claimed that this incident would affect Daisuke's reputation as well as his work on Log Horizon. However, few know that, after all, Daisuke paid off his taxes, including all fines. Despite the rumors, the house arrest didn't affect Daisuke's work. So there is nothing more to discuss. The tax evasion scandal has concluded. Therefore, it's no more affect the Log Horizon franchise.

Lack of the Source Material

Sadly, the hiatus between the two last light novel volumes was huge. Volume 10 of Log Horizon has been issued in September 2015, while the eleventh book appeared only on March 20, 2018. The Log Horizon anime consists of two seasons of full value that contain 25 episodes each. As a result, there must be a lot of source material for Season 3. However, we don't rule out a 12-episode third season. But still, any studio, whether it be NHK or another one, requires more light novels in order to produce the third season of the anime.

Both two seasons of Log Horizon have gained success among the viewers. The first season of the anime has a score of 8.08/10 based on more than 315,000 votes, according to MAL. The second season of Log Horizon was less successful and scored 7.67/10 ~ 183,000 votes. According to Oricon, the BD sales of both seasons have grossed Â¥245.1 million and Â¥148.4 million, respectively. So, overall, the franchise looks more than promising.

Will There Be A Season 3?

Mamare has stated numerous times that he is about to produce at least one more season of Log Horizon. At the same time, the author planned to conclude the series with Log Horizon Volume 15. On the other hand, the events happened to him may force Mamare to reconsider the attitude to his work. Given the fact that Log Horizon Vol. 11 titled "Krusty, Tycoon Lord" was released on March 20, 2018, there could be enough source material for at least a 12-episode third season of the Log Horizon television adaptation. Taking into account that the author renewed his work after such a long hiatus, we don't rule out that Mamare is about to produce nine more volumes. Besides, the additional volumes have been released as web-novels.

Log Horizon depicts the classic (for the anime genre) situation where the players found themselves trapped into the game and thereby turned into their avatars. We have seen almost the same idea in the SAO anime, as well as No Game No Life. Their new place of existence in the open world of Elder Tale, a popular MMORPG. It's obvious that a group of unfortunate gamers will have to adapt to the new conditions. However, it's worth mentioning that this world is inhospitable and severe. One thing is to fight with monsters upon the screen. Quite another matter is to meet them face to face.

Shiroe shortly becomes the team's leader despite the fact that he was a socially awkward student in real life. It seems that for him this reality is not a challenge, but rather a chance to become a hero. But the group must improve their fighting skills as the danger awaits them at every turn. Nonetheless, if you want to survive, you must be strong. Shiroe teams up with Naotsugu and Akatsuki to explore the new world where they found themselves. But they should be ready to face various dangerous obstacles. On the other hand, this is the only way to showcase their skills in strategy and capability of solving plenty of puzzles.

Summing up, looks like the Log Horizon franchise seems to be revived. Therefore, we have a chance to see the third seasons of the anime some day. At least, all indicators point out the soon renewal of the anime for Season 3. We are looking forward to the official news from Mamare Touno (Daisuke Umezu) as well as from the NHK. Once we get any reliable news, we'll update this page. Stay tuned for updates.

We opted to disable the comments due to the recent Google's algorithm updates. So, if you found this article informative, the best thing you can do is to share it with your friends and other anime fans. We'd like you paste a link to this article on your personal blog or website. Thank you!

Next Show: Sidonia no Kishi