Is There Going To Be A Season 2 Of Champions On NBC? 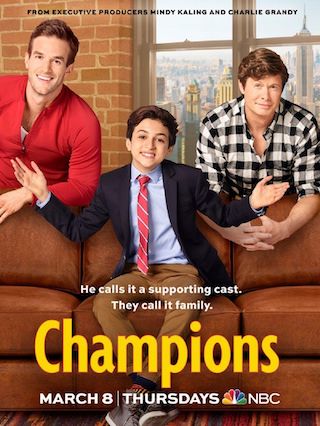 NBC is continuing to extend their comedy lineup. The network's freshman is Champions, a series created by Mindy Kaling. Though the show's premiere didn't manage to gather many viewers, the 2nd episode has drawn approx. 12% more viewers. Champions look like an average sitcom on NBC with the appropriate reception. But whether or not the comedy series has a chance to return for a next season on NBC? The Peacock Network has yet to announce their resolution. However, numerous indicators point out the further decision on renewal. Let's take a look at some of them.

The show's Pilot has garnered 2.701 million viewers with a 0.70 key demo (P18-49). However, as mentioned above, the next episode has drawn already 3.020 with the same demo rating among adults. Without a doubt, if the ratings continue to grow, NBC would have to renew Champions for another round. Honestly, these figures don't look solid for the national broadcaster. NBC's The Good Place has gained over eight million viewers during its premiere, for instance. However, this figure dropped up to three million viewers per episode by the end of the season. As a result, the more valuable indicator is the dynamics in the ratings. Undoubtedly, the uptrend looks promising for any series on TV.

Another fundamental factor is the reception from critics and viewers. The comedy series Champions was average in all the senses. On Rotten Tomatoes, the sitcom has a score of 6.23/10 and a 67% approval rating among critics, while the viewers have evaluated the first season of Champions at 4.4/5/80%. At the same time, on Metacritic, both critics and viewers have expressed almost the same opinion, 64/100 and 6.1/10, respectively. On IMDb, an overall rating of Champions is 5.5/10 ~ 330 votes.

So, despite the low start, the series, Champions has a strong potential for another season on NBC. The show's ratings are rising; the target audience seems quite satisfied, given the response; the series fits into NBC's comedy schedule. Summing up, our verdict is that NBC would likely opt to pick up Champions for Season 2. We just need to wait for the official confirmation from the Peacock Network.

What's The Show Champions About?

If you have yet to watch this comedy series on NBC, please read a brief overview of Champions below. Otherwise, scroll down to learn our forecast about the likely release date for a next installment of the series.

The story focuses on Vince and Matthew, two brothers who own a famous gym in Brooklyn, N.Y. Their life looks bright and carefree. The brothers date sexy women and enjoy their bachelor's rhythm of life. However, their lifestyle is at risk when Vince's high school ex-girlfriend presents him Michael, their savvy 15-year-old son, who pursues big city dreams. Both Vince and his dumpy brother Matthew now face with real troubles. This challenge seems to be another level of workout, to raise a son. Whether the guys be able to cope with this weight and become champions in parenting?

On The Possible Release Date For Season 2 Of Champions

As we have noted, we don't rule out the decision of NBC to pick up Champions for a sophomore season. Nonetheless, the network has yet to announce their decision on the subject. But in the case of renewal, we assume it could take at least a year to produce and promote another installment of Champions. Therefore, we think that Champions would return for Season 2 on NBC in March 2018. However, the fall and winter premieres are also possible since there were no data about the number of episodes in the season so far. In any case, this is nothing but our estimate. We are looking forward to the decision of NBC. We'll update this page when the network announces the additional data about the premiere. For now, stay tuned for updates. We'll keep you informed.