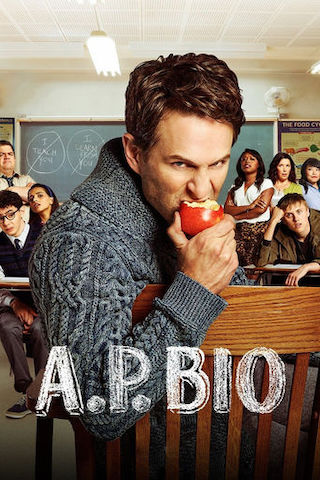 This workplace comedy opened this television season on NBC. It doesn't seem that A.P. Bio was successful enough. But the show's ratings and response of the viewers were satisfactory. The sitcom is available for streaming on NBC's official website as well as on YouTube. As a result, most of the viewers have already managed to appreciate this hilarious television project by NBC. Without a doubt, many of you are concerned about the possibility of A.P. Bio Season 2 on NBC. Luckily, the network announced May 9 that A.P. Biohad been renewed for another installment.

Frankly, we have been expecting the renewal. Below is our forecast on the subject.

The first thing we should take into account it the viewership. The show's premiere has garnered 3.117 million viewers with a 0.8/3 rating/share (P18-49). Generally speaking, this figure is not impressive enough for such network as NBC. Nonetheless, this indicator of the viewing audience looks enow for the show to get its second installment.

Let's take a look now at reception by critics and viewers. According to Rotten Tomatoes, the first season of A.P. Bio has a score of 6.04/10 with a 53% approval rating among critics, while the viewers have evaluated this show at 3.3/5/60%. At Metacritic, the figures look stronger, 60/100 and 7.5/10, among critics/viewers, respectively. On IMDb, an overall score of A.P. Bio counts 5.5/10 ~ 900 votes. Thus, in most cases, we see that the viewers were satisfied with this show. Nonetheless, the response from the target audience was mostly average.

We found this show at least amusing and funny. On the other hand, some critics were disappointed. For instance, Margaret Lyons from The New York Times concluded that A.P. Bio is "an abrasive sitcom that isn't merely unfunny, it's also deeply unpleasant." At the same time, Ben Travers (Indiewire) has noted that this "sitcom is earnestly uncaring and delightfully unscrupulous." Also worth noting that those viewers who estimated A.P. Bio average, mostly referred to their first impression. In short, despite the mixed reviews, we see a potential in this show, similar to many other viewers.

Summing up, A.P. Bio is a kind of show which causes ambivalent feelings. On the one hand, we oversee quite satisfactory ratings of the premiere. But, on the other, the key demographic indicator was low. A.P. Bio has received principally favorable reviews from the target audience, while the viewers demand something more from this series. As a result, we conclude that despite all the negative factors, A.P. Bio still has a chance for Season 2 on NBC.

If you still had no chance to watch this sitcom on NBC, please read a brief overview of A.P. Bio below.

The story focuses on Jack Griffin, a former Harvard philosophy scholar, who is forced to return to Toledo, Ohio since he has lost his dream. Instead, he gets a job at the Whitlock High School. Jack's new appointment is a high school Advanced Placement biology teacher. On his first day at school, it becomes evident that Jack isn't going to teach the students any biology. On the contrary, Jack regards his class as another opportunity to come closer to his dream. The only obstacle in the way is Principal Durbin, who, nonetheless, feels himself a boss.

About The Likely Premiere Date For Season 2 Of A.P. Bio

We assume that A.P. Bio could be back for its sophomore installment in February or March of 2019. Nonetheless, we don't rule out the premiere in this fall.

In any event, we will have to wait for the official announcement by NBC since all the data presented above are just our forecast. So, we will update this page when getting any additional data on the subject. Thus, stay tuned for updates. We'll keep you informed.

Next Show: The Path