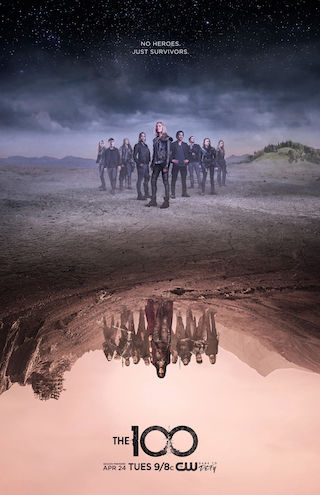 The CW has given an early renewal to its post-apocalyptic drama The 100, which will return for Season 7 in the 2019-2020 television season, according to the official announcement of the network. The 100 Season 6 is set to premiere on April 30, 2019, and no doubt the decision on renewal is an exciting news for all the fans of the teen drama series.

In addition, The CW has confirmed that the network picks up thirteen more primetime television series. All the fans thereby may breathe a sigh of relief since all their favorite TV series will be coming back for their respective next seasons.

Looks like The CW's management has been fully satisfied with the results of the fifth season of The 100, since the season premiere has garnered 18.07% more viewers versus its predecessor, 1.431 million with a 0.40 key demo among adults (P18-49). Also worth noting that the season's finale has drawn about a million viewers (0.99).

The 100, by the way, is still popular among critics and viewers, given the statistics presented by Rotten Tomatoes. According to their data, The 100 Season 5 holds a score of 8.8/10, and a 100% approval rating from critics, while the viewers have evaluated the 5th round of the post-apocalyptic series at 8.8/10, and have given a 81% rating. As a result, nothing is surprising in that The CW opted to include The 100 in their upcoming 2019-20 lineup.

The 5th season of the series as well as its 6th installment both were scheduled for April. As a result, we tend to believe that The CW isn't going to change anything in the network's schedule. Therefore, it seems that The 100 Season 7 is set to premiere on April 2020. The waiting won't be so long since we didn't see the sixth season yet. However, in any case, the data above is only our forecast.

Of course, we should wait for the official announcement from The CW since all the previous seasons started at a different time, in March, October, January, and February, respectively. So guys, stay tuned for updates. As soon as The CW announces any specific data about the upcoming premiere, we will update this page.

The story takes place in the dystopian future where a nuclear apocalypse destroyed almost all flesh on Earth. As a result, the rest of the survivors were forced to escape and settle at "The Ark," a massive orbital station. However, over time, all the life-support systems at the station were exhausted. Thus, the station's Chancellor ordered to send a group of juvenile prisoners back to Earth hoping that these 100 teens will be able to define whether or not planet suitable for life.

Upon arrival, the group discovered that some people managed to survive the apocalypse. All the survivors could be split into three groups: the Grounders, who live in clans locked in a power struggle; the Reapers, a group of the Grounders, turned into cannibals; and Mountain Men, the most "humanized" group of people, who hid inside Mount Weather before the apocalypse. Within all the subsequent seasons, the group initially consisting of 100 young adults is trying to survive while they found themselves in the severe conditions on Earth.

The 100 fought for their lives within four past seasons. That battle has torn them apart and separated from each other. Most of the guys have lost their best friends forever. The fourth season revealed that the human race is doomed to face an insurmountable threat: the nuclear reactors remained on Earth have melted down and are destroying the planet's atmosphere. The protagonists have little time to prevent the cataclysm, while all the possible solutions have vanished.

Now the guys stand before the end of the world. They will have to undertake the impossible to survive with or without each other. That's why the title characters will be forced to start from scratch in the aftermath of Praimfaya. In Season 5, the protagonists will have to explore their responsibility to the new place they call home and the next generations of people who will inhabit it. Will they able to cope with trouble and remain humans?