Splitting Up Together Will Return For Season 2 On ABC 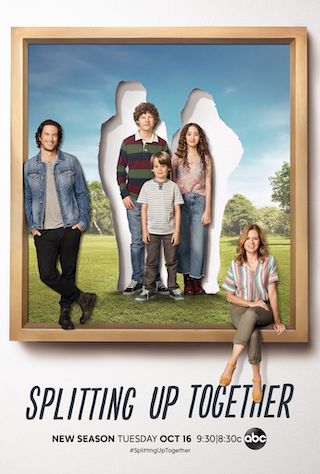 As a rule, divorce is a painful process. But what if this event starts to work in favor of wedlock? ABC's brand new sitcom, Splitting Up Together, which premiered at the end of March discloses such circumstances. The critics have met new show with mixed reviews, while the viewers were mostly satisfied with the new comedy on ABC. Those of you who adore this sitcom likely to wonder whether there will be a second season of Splitting Up Together on ABC? Fortunately, the national broadcaster announced May 12 that Splitting Up Together would return for Season 2.

We were sure in renewal. First, the Pilot has gained enough audience. The show's premiere has garnered almost seven million viewers (6.957) with a 2.10 key demo among adults 18-49. These figures, for instance, are higher than those of American Housewife (6.61/1.9), the show, which has got a second season on ABC. So, already this indicator plays in favor of renewal. But let's now take a look at the response from critics and viewers.

On Rotten Tomatoes, the first season of Splitting Up Together holds a score of 5.83/10 and a 40% approval rating from critics, while the viewers have evaluated the current installment of the sitcom at 4.5/5/81%. We oversee almost the same picture on Metacritic, 54/100 and 7.0/10, among critics/viewers, respectively. An overall score of Splitting Up Together on IMDb looks average as well, 6.6/10 > 300 votes.

Summing up, Splitting Up Together is another average sitcom on ABC. The target audience mainly positively met the show; the critics have expressed their ambivalent opinion regarding the sitcom; the television ratings were entirely acceptable. As a result, we were inclined to believe that ABC is about to renew Splitting Up Together for Season 2.

Splitting Up Together Summary

If you have not watched this sitcom on ABC yet, we suggest you get acquainted with a brief overview of Splitting Up Together. Otherwise, scroll down to learn our opinion on the subject of the possible release date for the likely upcoming season.

Inspired by the Danish comedy series, the show focuses on Lena and Martin, a couple which feels that their marriage was over. That's why they decided to file for divorce. Undoubtedly, it's a bold decision. Both spouses are apparently ready for this painful procedure. However, once they have initiated the process, Lena and Martin started to experience that they become closer to each other. Isn't it their second chance? It turns out that their experience in marriage has never been so intense. It seems that they both have got another starting point in their tense relationship. Perhaps it's time to re-estimate their marriage and start from scratch?

On The Subject Of The Likely Release Date For Season 2

Splitting Up Together might return for Season 2 already this fall. It's currently unknown how many episodes would be in the first season.

So, if the number of episodes is twenty-four or more, it could take more time to produce another season of the show. In that case, the premiere could take place next year, in January or even March of 2019. However, please bear in mind that this is nothing but our forecast. Of course, we are looking forward to the announcement by ABC. We will update this page when the broadcaster releases more reliable data on the subject. For now, stay tuned for updates. We'll keep you informed.

Show Name: Splitting Up Together