Renai Boukun (Love Tyrant) Season 2: How Strong The Odds For? 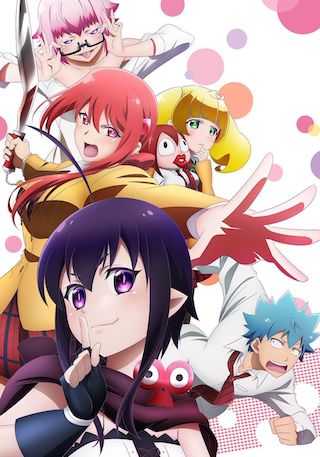 EMT2 isn't such a studio which can boast with the impressive ratings of its anime series. It appears that Renai Boukun is their best work, looking at the response from the audience. However, we should admit that a score of the series on MAL is rather average. Nonetheless, many fans are wondering, will this harem comedy anime show be returning for a next round? We, frankly, don't believe that the series will get another installment. Below are the reasons why.

First of all, the original manga contains just seven volumes. So the 12-episode television adaptation has apparently covered all the chapters of the story. The manga updates not frequently since only eleven parts have appeared starting from 2012. The last comic book was issued on April 11, 2017. However, it's worth noting that the manga is currently ongoing.

Secondly, EMT2 didn't update any of their anime series. The studio likely works for small budget projects consisting of just one season. As a result, none of them have received a continuation. From whence another reason follows. The graphics look somewhat ordinary. Thus, most likely, the project was initially conceived as a one-chapter series.

The final reason is a reception by the target audience. On MyAnimeList, Love Tyrant has a score of 6.95/10 ~ 50,000 votes. It is quite a common indicator. However, as mentioned above, Renai Boukun seems to be the best work of EMT2 since all the other anime series of the studio have a lower rating. On IMDb, this anime has a score of 6.5/10. Nonetheless, the viewers of Crunchyroll and FUNimation have appreciated the series in general. However, on the other hand, there were just a few votes to estimate the real response of the viewers. The rating provided by MAL looks much more reliable.

Summing up, we conclude that Season 2 of Renai Boukun likely won't happen due to the factors described above. However, perhaps, EMT2 consider Love Tyrant as their commercial success, and they could attempt to film a sequel. Anyway, we don't think that the fans of the series must give up. We'll continue to keep hoping with you that EMT2 might mobilize their efforts and to film another season which could receive excellent reception.

Love Tyrant premiered in April 2017 on TV Tokyo. AT-X, BS Japan also aired the series. EMT2 served as a developer of the television adaptation. FUNimation acted as a licensor of the anime in North America. The first season consisted of twelve episodes and came to an end on June 22, 2017. There has been no official announcement about the renewal of the series. To be sure of this, we suggest you visit the official website of the franchise.

What Is Renai Boukun About?

Guri is an angel whose mission is to serve as a cupid who unite the potential lovers. She has a Kiss Note where she marks the names of her next "victims." However, mistakenly, Guri included Aino Seiji in the list. According to the rules, anyone whose name exists in the Kiss Note must find the second half. Moreover, if the one whose name is in this powerful notebook doesn't kiss someone, Guri could die.

Seiji is just a typical high school student who doesn't care about any romantic relationship. However, if he won't kiss a girl within 24 hours, Guri will have no chance. Therefore, she convinces him to kiss Hiyama Akane, Seiji's crush, and one of the most popular girls in the school. However, it turns out that Akane's feelings to Seiji are even stronger. As a result, Seiji and Akane become a couple and starts their romantic relationship. But Guri suddenly realizes that she fell in love with Seiji herself. What most of the guys could consider good luck turned into hell for Seiji. In fact, he just wanted an ordinary relationship with girls.

As mentioned above, we doubt that Renai Boukun gets its second installment. However, everything may happen in the world of anime. Some popular series go on a long-term hiatus while other get updated within a short period. So we don't rule out the possibility that Love Tyrant might receive an OVA or even Season 2 at all. In that case, we don't think it would happen this year. Most likely, the story will continue in 2019. In any case, we're waiting for the official announcement. As soon as we get some official news, we will inform you on the subject. Stay tuned for updates.