Netflix Announced A Season 2 Of Its Dramedy On My Block 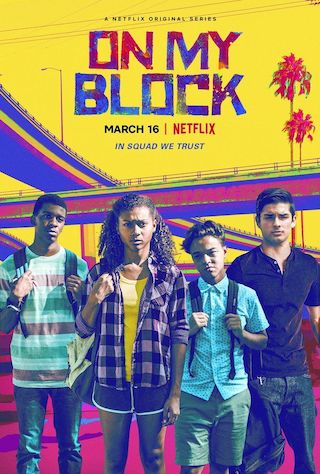 Everyone was talking about this new comedy-drama web series that kicked off on Netflix in March. On My Block caused a buzz this spring. This coming-of-age dramedy has received the universal acclaim. No one has remained apathetic after watching this masterpiece. You may have noticed that Netflix had got used to lay out all the episodes of its web series at once. Therefore, most of you are wondering whether there will be another season of On My Block on Netflix? Most critics and viewers, including us, was confident that there must be another round of the show. Fortunately, on April 13, 2018, Netflix officially confirmed that On My Block had been renewed for Season 2.

We've done a small study to figure out whether there will be the next season. You may get acquainted with these data below. It's important to read our forecast since it explains how we estimate the odds of any series to get another season.

Since the global broadcaster accustomed not to reveal the viewing figures of their web series, the priority indicator we've relied on was the response from critics and viewers. Generally speaking, we couldn't remember such impressive statistics on Rotten Tomatoes if to pay our attention to any recent series. By their data, the first season of On My Block holds a score of 7.77/10 and a 100% approval rating among critics, while the viewers have evaluated the comedy-drama at 4.9/5/99%. These figures look astonishing, isn't it? On Metacritic, the numbers were a bit lower but still very high, 72/100 and 8.7/10 among critics/viewers, respectively. An overall score of On My Block on IMDb also seemed high, 7.8/10 ~ 700 votes.

Secondly, we didn't want to spoil, but it was clear that the first season ended with a shocking cliffhanger. Yeah, we were talking about what happened to Olivia and Ruby in the season finale. The story remained untold. Without a doubt, the series couldn't stay unfinished with such intrigue. The situation that happened to the guys was nothing but a hint of the upcoming 2nd season. It was clear that Netflix was about to play on our nerves before the announcement of a next installment. Millions of teenagers were intrigued to get answers to their questions regarding what would happen next? So we regarded a hiatus as a marketing trick to force us to tremble in anticipation.

Finally, we assumed that Netflix would never risk their subscribers. After all, any client who could decide to unsubscribe might be the one who watched numerous web series. A dozen of web series could thereby lose the viewers. Besides, this year, Netflix invested $8 billion in expanding their media library. Who would watch all these new series if Netflix cancels On My Block? To be honest, this couldn't become a reason. We only hinted that Netflix would never cancel any successful web series. That's why this was evident for us that On My Block would return for Season 2 on Netflix. We just would be had to wait for a while before the global broadcaster announces the renewal. We were sure that this wouldn't take a lot of time.

On My Block Summary

If you have not watched this teen drama on Netflix yet, please read a brief overview of On My Block below. Otherwise, you may scroll down to get acquainted with our opinion about the likely release date for a sophomore season.

This coming-of-age dramedy focuses on four friends who make their first steps in adult life. The guys grew up in a rough inner-city Los Angeles neighborhood. That's why they're street-savvy, smart, and witty. The quartet enrolls a high school to face new challenges and to navigate through triumph and pain along the way. The web series discloses the issues of adolescence in the predominantly Hispanic and black neighborhood.

On The Likely Release Date For Season 2

We have mentioned above that we were confident in the decision by Netflix to pick up On My Block for another round. In fact, we shared the prevailing opinion since it was obvious. Finally, Netflix has announced their decision to pick up the web series for another round. But no words have been said about the exact release date.

We assume that On My Block will be returning for the next season in March 2019, given the current schedule. But please take into account that this is nothing but our forecast. We are waiting for the official report from Netflix. Of course, we will update this page when the streaming giant releases some additional info. For now, stay tuned for updates. We'll keep you informed.

Show Name: On My Block

Next Show: For The People