Masamune-kun no Revenge: Will There Be A Season 2? 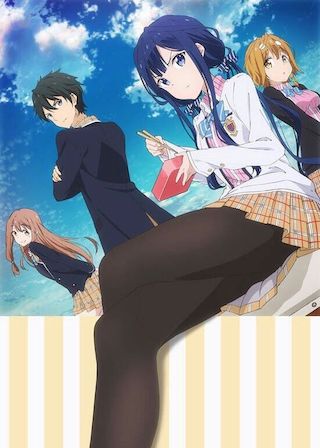 Some of you may have been disappointed with the ending of the first season of Masamune-kun's Revenge since there has been no revenge in fact. Therefore, the series presumably must end otherwise, or there should be a second season at least. Nonetheless, SILVER LINK., Inc. has not announced any exact information on the subject of a second installment. In spite of this, many fans attempt to figure out, whether or not the studio is going to produce one more season of Masamune-kun no Revenge. Let's try to learn altogether, is there any possibility of renewal.

As usual, a principal factor which affects the decision is the availability of source material. Masamune-kun's Revenge is a television adaptation which takes its roots in the eponymous manga series. The first season of the anime has covered six volumes. As a result, only two more volumes remained for another television adaptation. Therefore, there is not enough source material for season two. On the other hand, the original manga is currently ongoing. The recent eighth volume was issued on January 27, 2017, in Japan. Meanwhile, the English version of the seventh volume will be released only on January 23, 2018, in the United States. Thus, on the contrary, the show's creators need just two more volumes in print, to film another television adaptation. So, this can't happen now but is entirely possible in the foreseeable future.

Moreover, it looks like the viewers have appreciated the first installment of Masamune-kun no Revenge, given the statistics by MyAnimeList. According to their data, the first season of the anime has a score of 7.06/10 ~ 125,000 votes. This figure seems to be a significant indicator which reflects a reception by the target audience.

But still, there exists another possibility how the show might continue. Yes, we're talking about an OVA, which may reveal a logical conclusion of the first season. This scenario looks believable as well. But, in any case, there must be some sequel, by our opinion. Besides, the fans are eager for the plot decoupling. So, we believe that Silver Link must provide the demand.

Unfortunately, there are no particular data regarding the revenue of the Silver Link studio. Therefore, we can't estimate whether or not they were managed to cover the expenses. Furthermore, the BD/DVD sales statistic doesn't look impressive (about 600 items/week). Nevertheless, we still think that Masamune-kun no Revenge Season 2 might take place. The only question remains, when?

Masamune-kun's Revenge Season 1 premiered in January 2017 on Tokyo MX. Soon afterward, KBS, SUN, AT-X, and other Japanese broadcasters began airing the anime. The Silver Link studio acted as a developer of the television adaptation. Crunchyroll served as a licensor of the series in North America. The first season consisted of twelve episodes ended on March 23, 2017. Since then, there has been no official news about the renewal. To be sure of this, we suggest you visit the official website of the anime series.

What Is Masamune-kun's Revenge About?

It's quite difficult to be lucky with the opposite sex when you are a chubby boy. Masamune Makabe felt a strong attraction towards Aki Adagaki. But she violently rejected his feelings. Of course, she is wealthy and attractive, that's why Aki doesn't want to see such a loser close to her. Moreover, she calls Masamune "Pig's Foot." Therefore, it wasn't a surprise that Masamune decided to turn into a handsome guy to accomplish his revenge. To do that he passed through numerous workouts and followed an individual sports diet.

Eventually, Masamune reached his goal and was managed to improve himself. He is now a handsome, sexy and attractive. It's time to take revenge. Obviously, when he encounters Aki one more time, she doesn't recognize him. Therefore, he is going to seduce her to launch his tricky plan in action and break an Aki's heart in proper time. However, over time, Masamune begins to doubt his true intentions since his feelings are still strong, especially when they both became closer to each other.

As mentioned above, there must be at least two more volumes to produce another television adaptation for the Masamune-kun no Revenge manga series. But it takes at least a half of the year for Hazuki Takeoka to issue two other volumes of the manga. Thus, we may see Volume 8 only closer to December 2018. So, even if, Masamune-kun's Revenge Season 2 happen, it would be not earlier than in 2019. But, of course, we might be wrong, since we have presented here just our assumption. Therefore, we are waiting for the official announcement. Be sure; we'll inform you on the subject. Stay tuned for updates.

Next Show: Shokugeki no Souma