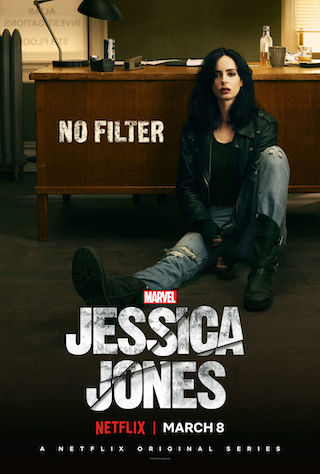 The waiting is over. Marvel's Jessica Jones returned to Netflix for its 2nd round at the beginning of March. As usual, Netflix has released all the episodes simultaneously. Those of you who have finished watching the season is likely to wonder, whether there will be a next installment of the neo-noir superhero series? Fortunately, Netflix has given an early renewal for Marvel's Jessica Jones. On April 12, 2018, the network announced via their official Twitter page that the superhero series would return for Season 3.

To be honest, each of us knew that Marvel's Jessica Jones is a long-term television project, which ideally fits the Netflix lineup, especially, given the variety of the television adaptations of Marvel Comics in their media library. Besides, many objective facts confirmed this assumption.

Let's, for instance, take a look at the response from critics and viewers. The current season of Jessica Jones was a success, similar to its predecessor. On Rotten Tomatoes, the show's score is 7.02/10 and an 87% approval rating from critics, while the viewers have evaluated the current installment at 3.7/5/71%. At the same time, on Metacritic, the figures were a bit lower, but still acceptable, 70/100 and 6.0/10, among critics/viewers, respectively. An overall score of Jessica Jones on IMDb also remains high, 8.1/10 > 151,000 votes. So, we were sure that Netflix would take all these data into account.

However, the more reasonable factor able to affect the decision on renewal was that Netflix serves a platform for numerous superhero web series, while most of them are successful. It would be reckless to cancel Jessica Jones, given the fact that the target audience of this web series also is also watching other superhero series such as Daredevil, Luke Cage, Iron Fist, and The Punisher. Besides, Jessica Jones is the only superhero series targeted mostly at the adult audience.

Summing up, the statistics pointed out that Marvel's Jessica Jones would surely return for Season 3 on Netflix. Undoubtedly, the global broadcaster regarded this neo-noir drama series as a long-term web series. Jessica Jones, furthermore, stands in one row with other (nonoriginal) superhero series on Netflix. The network had been spending years in gathering this target audience. That's why the decision on renewal was just a matter of time.

If you have not watched this neo-noir web series on Netflix yet, we suggest you read a brief overview of Jessica Jones below. Otherwise, you may scroll down to learn more about our forecast on the possible release date for a third season of the web series.

The story focuses on Jessica Jones, an unlucky superhero, which differs from other heroes with superhuman abilities. When a tragedy forced Jessica to forget about the career as a superhero, she preferred to work as a private investigator in her own detective agency, Alias Investigations. Instead of saving the world, Jessica, as a rule, opts to drink in an attempt to cope with her post-traumatic stress syndrome, as well as to track down people who cheat their spouses. But one day, a new case pushes Jessica to remember her true identity and deep deeper into her past.

On The Likely Release Date For Season 3

As mentioned above, we doubted that Netflix was about to cancel this superhero web series. Though all the data presented above were nothing but our forecast, we used the statistics and common sense in an attempt to predict the future of the series. As a result, we were right on the subject of renewal.

We are inclined to believe that the upcoming season could start this fall. Given the worst scenario, Jessica Jones could return for Season 3 at the beginning of 2019. Since we don't know the exact date, we are looking forward to the official news from Netflix. We hope the waiting won't take so long. So, we'll update this page when getting more reliable data on the subject. For now, stay tuned for updates. We'll keep you informed.