Highschool of the Dead Season 2: We Finally Have Some News 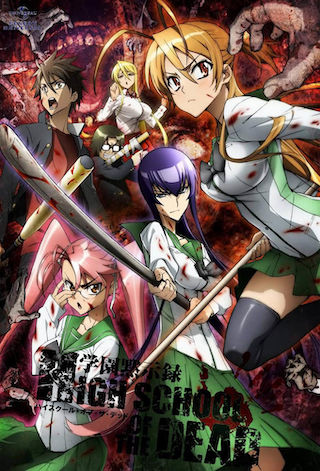 No doubt, you're looking forward to Highschool of the Dead Season 2. Yet you can't find at least any news on the subject. As you know, the anime went on a long-term hiatus in 2011. Too many tedious years have passed since that date, and you, most likely, have already lost any hope of renewal.

You probably have learned a lot of fake news about the next season of H.O.T.D., but none of such sources turned reliable. Therefore, the first thing we want you to pay your attention is that there is still no confirmation of the 2nd season of the anime. Don't waste your time reading about the Highschool of the Dead Season 2 release date. There is no subject to discuss.

The second thing you should take into account is that As a result of ischemic heart disease, Daisuke Sato has passed away and left our mortal world. The disease interrupted his life him on March 22, 2017. He was just 52. If you didn't know about it, we regret to report such a sad news.

Nonetheless, unlike other media outlets, we have at least some reliable data on the subject of the future of H.O.T.D. On December 11, 2018, in an exclusive interview for with Japanese pop culture website Comic Natalie, Shoji Sato, a manga artist, who stands behind Highschool of the Dead stated that it is "not easy" to draw a sequel to H.O.T.D.

Shoji has been responsible only for artwork and have no relations to the storyline. Shoji nonetheless admitted that the manga is currently on hiatus only because of the author's death. In additional, Shoji reported that he received a lot of messages from overseas fans who ask him to draw the continuation, and who, apparently, are not concerned about the situation.

Shoji also empathizes that there is no one in the world who might have the same vision as Daisuke, and thereby there is no way to continue the story without him. Shoji latter added that, in order to produce Highschool of the Dead Season 2, we would need somebody who both knew Daisuke's vision on the future of the anime series, as well as possessed proper abilities to transfer his thought correctly.

Also worth noting that Triage X editor Kawanakajima (nickname) stated that it's a widespread practice overseas when any comics or novel is created by many collaborators. However, in the case with H.O.T.D., there is nobody else unless Daisuke himself, who might write the continuation of the series.

Shoji Sato admits that he can't draw a sequel to Highschool of the Dead. On the other hand, he might to channel some of the series' appeal into his current work Triage X.

Summing up, we now know at least some competent opinion on the subject of Highschool of the Dead Season 2. As you may see, there won't be any continuation of the anime without the manga author. We don't claim that the franchise is completely dead, however, all indications are that it's true.

Despite the fact that the franchise is dead, as we may have convinced above, there still remains a ghostly chance of renewal.

Of course, the original manga can't be extended with more volumes without its author. We pay tribute to the author for his work. But still, the manga contains enough material for a second season of the anime. Season 1 covered just four volumes; three more left.

We need thereby only one book, to create another season of the anime. Without a doubt, no one might cope with such a job better than the author. However, this is a widespread practice to add more new volumes to the current story, isn't it? In such a case, we could get another season of Highschool of the Dead, with the only difference, its finale. After all, someone would have to meet the demand caused by the hordes of fans.

Highschool of the Dead was a fan favorite. Millions of viewers were striving to figure out the possible ending of the story. On MyAnimeList, the anime has a score of 7.32/10 based on over 526,000 votes. On IMDb, H.O.T.D. holds the same rating > 9,100 votes.

At the same time, the subscribers of the online video streaming service Hulu have evaluated the post-apocalyptic anime at 4.7 out of 5 stars ~ 15,300 votes. Given the popularity of the anime series among the target audience, a sequel might become a commercial success.

Even if Madhouse doesn't want to produce another installment of H.O.T.D., why A-1 Pictures or White Fox can't cope with such a job? After all, Highschool of the Dead is a tidbit for Netflix. To be honest, Netflix possesses enough resources to revive the franchise. Perhaps you are not aware of the fact that the global broadcaster invested $8 billion this year, to extend its library.

The most curious is that Netflix was about to spend the most of the money to produce 30 anime series. You may have watched some of these masterpieces, such as B: The Beginning and A.I.C.O.: Incarnation.

On the other hand, there are plenty of animation studios in Japan as well as in the US capable of producing the anime of proper quality. But, it seems that none of them is capable of hearing the voice of the fans. It's a pity! The franchise seems to be dead, unfortunately. It appears that no one possesses the ability to revive it. We just may pray, crossing the fingers, hoping that someone at Netflix, responsible for a decision, could pay attention to H.O.T.D. Of course, this chance looks foggy, doubtful, and unlikely. In fact, little depends on us. As you may see, the petition managed to gain just a few subscribers. Here is another example, pointing out the same result.

Highschool of the Dead is a typical zombie apocalypse series taking place in Japan. As a result of the deadly pandemic, the hordes of walking dead flooded the streets of a small Japanese town. A small group of students managed to survive the apocalypse, and they are trying escape, facing squads of zombies in the way. The students found themselves trapped amid fierce monsters who attack them.

It seems that the situation is hopeless, and the guys may rely just on themselves. Their mission, thereby, is to reach the elementary school somehow, the place, which is considered to be their shelter. It's too complicated to accomplish this task while encountering zombies at every turn. Besides, the world is torn apart, and most of the people went out the boundaries of morale. The students can't fully realize who are their friends but who in turn are the enemies. Additionally, they are forced to kill all the people turned into walking dead, including their friends. The way is full of traps and unexpected dangers. But the goal is to survive the zombie apocalypse.

Show Name: Highschool of the Dead