High School DxD Season 5: What We Know So Far 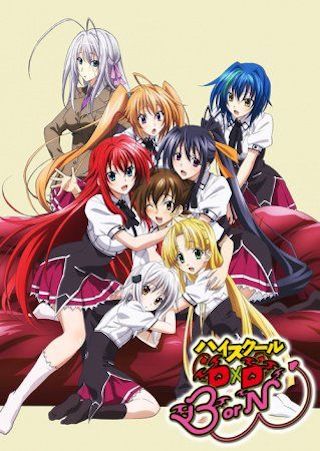 For those of you who is looking forward to High School DxD Season 5, we have some news. There is no official confirmation of the next season of the anime. Unfortunately, this is true, and we thereby don't want you to wait for something someone groundlessly promised to you.

It would be useful for you to know that once a studio announces any official news about renewal or even release date, a spokesman certainly publish the official release on the official website and Twitter account.

If we take a look at the official sources, such as we pointed out above, those who stand behind High School DxD are now currently engaged in promoting the BD/DVD release, the studio is going to sell. As a result, those people who are responsible for the renewal are still working on High School DxD Hero merchandising.

Even if High School DxD Season 5 is ever confirmed, most likely, a gap between the current and upcoming season would be not less than 2-3 years. The reason is very simple. On the one hand, Passione Co., Ltd. is currently working on other projects such as Joshi Kosei no Mudazukai, which is set to premiere this July, as well as Z/X, which premiere is slated for October 2019. On the other, they don't have enough sales statistics right now to make a right decision.

Of course, both you and we know the fact that TNK has abandoned High School DxD, and, fortunately, Passione rescued the series. Yet you should realize that we will have to wait some time before getting any news about High School DxD Season 5.

High School DxD has been a new project for the Passione studio. As a result, the studio's leadership is about to evaluate the incomes the franchise is capable of providing. Therefore, as long as Passione are not sure in the commercial advisability of the High School DxD franchise, the creators won't get to work on Season 5, no doubt.

Whether There Will Be High School DxD Season 5

The right question we should ask is whether there will be High School DxD Season 5? According to ANN, about 2,836 BD copies were sold per week in October 22-28. The anime thereby took the 11th place in the list, close to SAO and Darling in the FRANXX. In addition, 726 DVD items have been sold same week.

Having such reliable data in our "pocket" of facts, we now might assume that High School DxD has a chance for Season 5. Moreover, the current season sales have surpassed those of the previous installment of the anime. Therefore, the odds look very high. Another question we should think about is when will High School DxD Season 5 in the case of renewal.

As mentioned above, we evaluate the odds of High School DxD to be renewed for a next season as very high because of the very favorable sales statistics. Yet since the renewal is yet to be announced, we might only speculate on the subject of the possible release date.

In our opinion, High School DxD won't return for Season 5 neither this nor next year. The closest period, we might expect High School DxD Season 5 premiere, in the positive case scenario, is April-July 2021. Nonetheless, we don't rule out earlier premiere completely.

If the Passione studio considers the BD/DVD sales successful enough, as well as in the case that the expenses overcome incomes, we might see High School DxD much earlier. Yet still, in any case, we will have to wait for the official announcement. Don't believe the rumors. Until the studio announced the official pick up of High School DxD for Season 5, no-one knows the exact data.

Therefore, we are looking forward to the official news from the Passionate studio. As soon as the studio announces the renewal, as well as the exact premiere date for a Season 5, we will update this page. Stay tuned for updates. We will keep you informed on the subject.

What Is High School DxD About?

In fact, High School DxD is a typical harem anime whence its incredible popularity among the fans. It's a television adaptation of the eponymous series of twenty-two light novels by Ichiei Ishibumi. The story takes place in a former all-girls Academy and focuses on Issei Hyodo, a perverted high school student. He has no girlfriend, but he dreams of obtaining one. Despite the fact that Issei attends the all-girls school, he still unlucky as for the interaction with the opposite sex. Issei calls for Gods that they send him a girlfriend. And the Gods answer to his prayers.

Unfortunately, Issei dies on his first date with Yuma Amano, as she is indeed a fallen angel. Waking up the next morning, Issei hopes that it was just a dream. However, he discovers Rias Gremory, his busty classmate naked in the room. Rias explains to him that she is a devil, who revived Issei. As a result, he must obey her, as a servant. On the other hand, Issei is now a demon himself, that gives him some promising opportunities. Thus, Issei joins the school's Occult Research club full of sexy female students. Now his mission is to survive amidst the collision between angels and demons.

Next Show: Made in Abyss