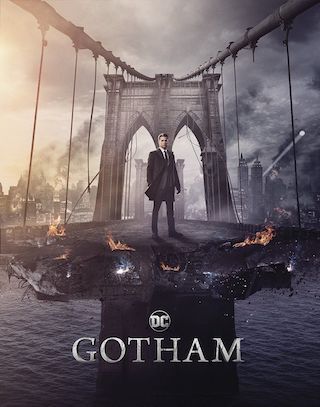 Despite a significant drop in the ratings, Gotham yet remains in the FOX schedule. Of course, most of you are concerned about the further destiny of the police procedural series. There is two news on the subject. On May 13, 2018, FOX announced that Gotham had been renewed for a fifth season. However, it would be the last installment of the crime drama.

Indeed, the viewing audience of the show is gradually decreasing. The current season's premiere has garnered 3.21 million viewers with a 1.0/4 rating/share (P18-49). This figure is 17.60% lower compared to the previous season's premiere. The subsequent episodes of the fourth season drew less than three million viewers each. Thus, unfortunately, the downtrend is evident.

We evaluate the third installment of Gotham as the most successful among all, given the statistics by Rotten Tomatoes. According to their data, the current season of the series has a score of 6.8/10 with a 92% (!) approval rating among critics. Meanwhile, the viewers have rated the 3rd season at 4.2/5/86%. On Metacritic, the season has a score of 7.4/10 among the target audience. So, we conclude that both critics and viewers still love the Gotham. Critics were especially impressed with the current installment of the show.

Summing up, we believed that Gotham had a chance to return for Season 5 on FOX, despite the significant drop in the viewership. Of course, the decision on renewal entirely depended on FOX. However, we assumed that the network should take into account the response from the target audience and critics.

What Is Gotham About?

If you have not yet watched Gotham on FOX, please, read a brief overview below.

The story focuses on an aspiring detective Jim Gordon, who is a son of a former local district attorney. Jim is a devoted cop, which dreams of restoring the order in his hometown. However, everything has changed since his childhood. Currently, Gotham is withering, plunged into corruption and crime. Gordon's first case is to investigate the murders of Thomas and Martha Wayne. Harvey Bullock, a legendary detective, assists him in the investigation. Over time, Jim encounters Bruce, a son of Thomas and Martha. Bruce is a successor of Wayne Enterprises, who is now in the care of butler Alfred Pennyworth. Eventually, Jim befriends with Bruce Wayne, who later becomes a masked vigilante, known as Batman.

As mentioned above, despite the ratings that play not in favor of renewal, FOX opted to pick up Gotham for a next round. According to the official announcement Gotham Season 5 Release Date is slated for January 3, 2019 on FOX. There is no official synopsis for the next season so far. However, you can watch a sneak peek below.