Food Wars! Shokugeki no Soma Season 4: What We Know So Far 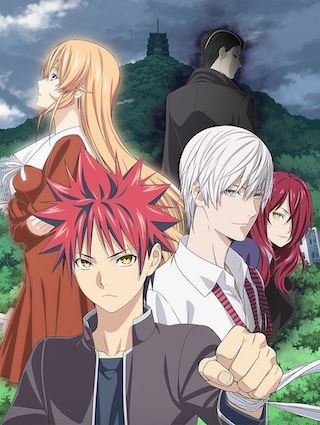 Food Wars! Shokugeki no Soma Season 4 is definitely due to happen. Those of you who finished watching the third installment of the anime back in June 2018 are looking forward to a next season. However, first of all, let's figure out the right order of the seasons in the series since there is quite a widespread misunderstanding on the subject.

In fact, only three seasons of Food Wars! have aired to date. Shokugeki no Soma Season 1 premiered on April 4, 2015, and it was a 24-episode, two-cour season, which has been split into two particular chapters (cours), each consisted of twelve episodes. Many viewers have mistakenly taken this two-cour season for two separate seasons.

A sophomore season of the series consisted of only thirteen episodes, and aired between July 2 and September 24, 2016. It was a single-cour season titled Food Wars! The Second Plate. Finally, Shokugeki no Soma Season 3 debuted on October 4, 2017, and it was another two-cour, 24-episode season split into two parts.

As a result, we are looking forward to Food Wars! Shokugeki no Soma Season 4. The J.C.Staff studio has yet to announce the renewal. However, we have every reason to believe that Food Wars! Season 4 is just a matter of time, and below we would like to prove our assumption.

The foremost indicator in favor of renewal is that there is enough source material for another television adaptation. As you know, Food Wars! Shokugeki no Soma is based on a Japanese manga series of the same name, which is currently consists of 35 volumes. By the way, Food Wars! Shokugeki no Soma Vol. 35 has been issued recently, on June 4, 2019. As a result, the original manga is currently ongoing.

Food Wars!: Shokugeki no Souma Season 1 covered the first eight volumes of the original manga, while a sophomore season served as a television adaptation for the next seven volumes. Finally, the current season, which started with chapter 118, concluded somewhere closer to Volume 20. As a result, at least fifteen new volumes are ready for another television adaptation, Food Wars!: Shokugeki no Souma Season 4.

Next, let's take a look at the reception, which the 3rd season of Food Wars! Shokugeki no Soma has received from the viewers. The second cour of Shokugeki no Souma season 3 has received a brilliant reaction from the target audience, according to a high score, which it holds on MyAnimeList, 8.36/10 based on over 127,000 votes. In addition, also worth noting that all the previous installment of the anime kept a high score as well.

Finally, let's pay our attention to the BD/DVD sales of the franchise. On an average, about 800 BD items were sold per week. Though such an indicator doesn't look impressive, yet such amount is enough to cover the expenses. Summing up, given all the data presented above, we tend to believe that Food Wars! Shokugeki no Soma Season 4 is just a matter of time.

We want to repeat it one more time, there has been no official announcement of Shokugeki no Soma Season 4 so far, no matter what you have heard and read on the subject. However, taking into account all the positive factors presented above, we don't rule out the possibility of renewal. All we can do is just keep waiting for the official announcement from the J.C.Staff studio.

As mentioned above, Food Wars! Shokugeki no Soma Season 4 is yet to be announced. But since we believe in the renewal, in such a case, we will have to wait at least until next summer or even next fall, because it's quite a laborious process to produce a 24-episode season. Therefore, we expect Food Wars! Shokugeki no Soma Season 4 premiere some day in July 2020, or even in October 2020, given the current schedule of the series.

But still, you should bear in mind that all the data presented above are nothing but our forecast. Therefore, we are tracking down all the official news, which arrives from the J.C.Staff studio. As soon as the studio reveals any data on the subject of Food Wars! Shokugeki no Soma Season 4, we will update this page. So guys, stay tuned for updates. We will keep you informed.

The story focuses on Souma Yukihira, a 15-year-old boy who aspires to become a full-time chef in the family's restaurant. However, his father was forced to travel overseas due to his new job opportunity. As a result, he decided to close the restaurant. But Souma doesn't want to leave the family business. Thus, his father thrown Souma a challenge.

If he wants to take control of his father's eatery, Souma must perfect his culinary skills at Tootsuki Culinary Academy, where only one out of ten has a chance to graduate. To showcase their culinary talents, the students must fight each other in the so-called "food wars." The storyline thereby follows the adventures of Souma in the Academy where he acquires new cooking experience as well as new friends.

Is It Wrong to Try to Pick Up Girls in a Dungeon?

Next Show: Grimoire of Zero