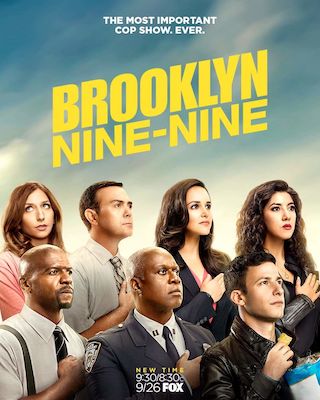 Last season the police procedural sitcom Brooklyn Nine-Nine experienced a notable drop in the viewing audience. Nonetheless, FOX has opted to pick up the series for one more season. The current season has lost about 16.45% of viewers in comparison to its predecessor. Thus, a reasonable question arises, whether or not there will be the sixth season of Brooklyn Nine-Nine on FOX? Unfortunately, FOX opted to cancel the sitcom after five seasons. Luckily, NBC announced May 12 that the network picks up Brooklyn Nine-Ninefor a 6th season.

Honestly, we have been expecting the cancellation. But we, nonetheless, believed that Brooklyn Nine-Ninehad a chance to survive. Fortunately, we were right. Read our forecast below.

First, we'd have to admit that the sitcom remains a fan favorite. It appears that the target audience is entirely satisfied with watching the fifth season of Brooklyn Nine-Nine. On Rotten Tomatoes, the current installment of the show has a score of 4.6/5 and a 94% approval rating among the viewers. At the same time, on Metacritic, this figure looks a bit lower but still favorable, 6.4/10. On IMDb, the sitcom keeps a pretty high score of 8.3/10 ~ 95,000 votes. As a result, these indicators, without a doubt, play in favor of renewal.

As for the television ratings, as mentioned above, the viewing audience is continuing to decrease. The fifth season's premiere has garnered just about two million viewers (1.996) with a 0.74 key demo (-30.66%, P18-49). Of course, these figures don't look impressive enough, especially given the fact that the audience dropped up to 1.81 million viewers by the end of Season 5A. Also worth noting that the fifth episode of the season titled "Bad Beat" has garnered only 1.495 million viewers. Unfortunately, we assume that if the viewing audience of Brooklyn Nine-Nine is dropped below the mark of 1.5 million viewers per episode, FOX would have to cancel the show. Otherwise, Brooklyn Nine-Nine will have a chance for another round on FOX.

Summing up, the statistics for Brooklyn Nine-Nine doesn't look favorable this season. Though the reception seems to be impressive, the television ratings don't play in favor of renewal.

What Is The Show Brooklyn Nine-Nine About?

If you have not watched this police procedural sitcom on FOX yet, please read a brief overview of Brooklyn Nine-Nine below.

The story focuses on Jake Peralta, a gifted but a reckless police officer, who, having the best arrest record, used to violate the rules and works not carefully enough. However, his life dramatically changes when Ray Holt, the newly appointed Captain of Brooklyn's 99th precinct, becomes his boss. Holt is about to force Peralta to respect his job. Meanwhile, Jake is attempting to resist such attitude and do the things as he used to. Whether or not Holt will be able to force Peralta to become an exemplary cop?

As mentioned above, Brooklyn Nine-Nine has been rescued by NBC, the network, which has picked up the show for its sixth season. According to the official announcement, Brooklyn Nine-Nine Season 6 release date is slated for January 10, 2019. Don't miss the premiere. Stay tuned for updates.