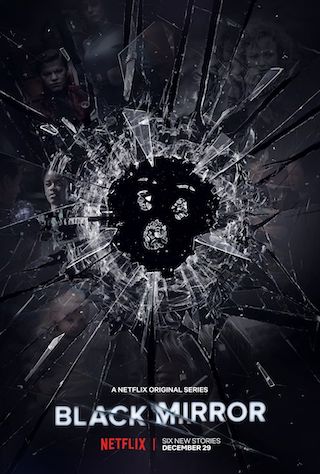 At the beginning of May, Netflix announced that Black Mirror Season 5 is set to premiere on Wednesday, June 5, 2019. The fifth season of the web series will explore three all-new stories titled "SMITHEREENS," "RACHEL, JACK AND ASHLEY, TOO," and "STRIKING VIPERS." There is no official synopsis for the upcoming season, yet Netflix has teased a bit of data about each new story.

You should've seen it coming. pic.twitter.com/E5bYvVJjik

"Smithereens" is a story which revolves around a cab driver, which attracts attention since his agenda went out of control. "Rachel, Jack and Ashley Too" explores the intention of a lonely teenager to be closer to her pop star idol. "Striking Vipers" follow two college friends who reunite in later life, what causes a series of event that could change their lives forever. Watch the official trailers for each story below.

This British anthology series was a success during the past four season. Without a doubt, you have been expecting the renewal. Finally, on March 5, 2018, Netflix announced the exciting news through the official Twitter page. The fourth installment of Black Mirror has received the universal acclaim. The official motto of Black Mirror Season 5 is "The future will be brighter than ever."

Indeed, the statistics of the fourth installment of Black Mirror were impressive. On Rotten Tomatoes, the recent season has a score of 7.9/10 and a 84% approval rating from critics, while the viewers have rated the fourth round of the show at 4/5/ and have given a 81% rating. On Metacritic, the picture looks almost the same way, 72/100 and 7.1/10, among critics/viewers, respectively. At the same time, on IMDb, Black Mirror holds an overall score of 8.9/10 based on about 312,500 votes.

Starting initially on the British Channel 4, Black Mirror gained its international success thanks to Netflix, which had picked up the series in 2017. The first season's premiere has garnered over two million (2.07) viewers in the UK. Unfortunately, Netflix never unveils the viewing figures for its web series. However, Black Mirror is on the list of the most popular shows on Netflix.

This show depicts the modern world which hides many dangers because of the high development of advanced technologies. Each episode, as a rule, presents the near future and describes how the technology may affect the society. The past decade allows us to foresee what do we need to expect in the foreseeable future. Every day we watch in the black mirror, whether it be a smartphone, TV, tablet, or another high-tech device.

Our connection with reality has changed forever. Apple, Google, Facebook, Twitter do matter in the modern world. Each new technology makes our life more comfortable, on the one hand. On the other, every innovation is potentially dangerous since it possesses numerous imperfections, vulnerability, and defects. The web series, thereby illustrates how the world may change if the technology will develop so rapidly.

Next Show: The Good Doctor