B: The Beginning Season 2 Confirmed by Netflix 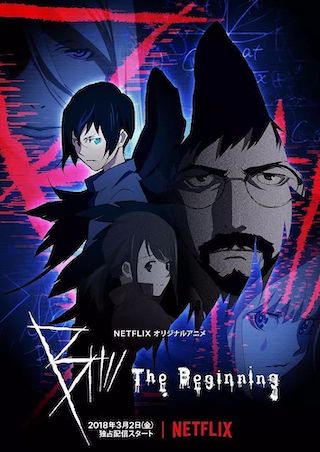 On June 12, 2018, Netflix officially announced B: The Beginning Season 2. Despite numerous rumors no release date has been set so far. Don't believe those media outlets that claim that the exact date for the premiere is already confirmed. The only reliable source on the subject is Netflix itself. The decision on renewal has been announced during the Annecy International Festival of Animated Film, the event, which took place last summer.

It's worth noting that Netflix is pretty serious about anime since 2018. The company invested about $8 billion in production of new video content, where a major percentage of such huge amount was spent on anime. According to The Verge, 30 new anime series have been produced last year. We're happy that B: The Beginning stands in the one row with other Netflix hits, and even has been renewed for another season.

In fact, the decision was expecting. B: The Beginning was positively met by the viewers, with a score of 7.59/10 based on 60,400 votes, according to MyAnimeList. The anime, by the way, went from the wing of Kazuto Nakazawa, the one who served as the animation director for Kill Bill. Therefore, we did not doubt the success.

B: The Beginning Season 2 Release Date

As mentioned above, Netflix has yet to announce B: The Beginning Season 2 Release Date, at least to date. We might assume that the premiere is slated for March 2019. Nonetheless, as you may have witnessed by the end of March, there is no Season 2 so far. Since we don't know any reliable data, we might predict that B: The Beginning Season 2 premiere is scheduled for this fall. Yet given the fact that The OA Season 2, for instance, has been released only in March 2019, with almost a three year gap between its debut season, it's really complicated to make any forecasts on the subject.

Therefore, we are looking forward to the official news about B: The Beginning Season 2 from Netflix. As soon as, the broadcaster announces the exact premiere date for the upcoming season, we will update this page. Stay tuned for updates.

B: The Beginning Summary

The story unfolds in the world which was able to gain the high development of advanced technologies and computer networks. The primary storyline focuses on Koku and Keith, where the latter is the legendary investigator of the royal police force RIS. Keith's mission is to cope with the mysterious crime organization. However, aside from the Mob, the city is threatened by a chain of mysterious and violent murders. A criminal, nicknamed "Killer B" leaves his signature at the crime scenes. The protagonists thereby will have to reveal the true identity of the Killer B and track down the chain of crimes.

Show Name: B: The Beginning

Previous Show: Classroom of the Elite