Archer Is Coming Back For Season 11 on FXX 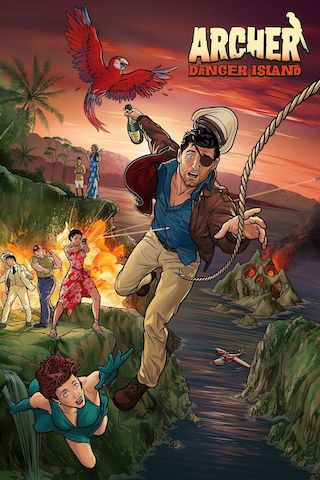 FXX shared an exciting news with all fans of Archer, announcing that Season 11 is confirmed and is set to premiere in 2020. No specific release date has been revealed so far. The decision on renewal has been announced on the eve of the series' penultimate episode titled "Cubert," which is set to air on Wednesday, July 24, at 10 p.m. ET/PT on FXX.

No, you arenâ€™t dreaming. Seriously, you arenâ€™t. #ArcherFXX is coming back for season 11 and heâ€™s wide awake. pic.twitter.com/FdRT8FOX0b

You may have heard that Adam Reed was going to leave the show. However, it turned out that such announcement didn't mean that there isn't going to be another round of Archer. To be honest, we were sure in such a decision of FXX, given the statistics of the current season of the adult animated sitcom.

No doubt, it's not good that the show loses its viewers, yet we must take into account that Archer was in its tenth round, and a few shows on TV could survive so long. We thereby regarded the viewing audience of the current season of Archer enough for the decision on renewal.

Another key factor, which affected the future of the adult animated sitcom was the reception, which Archer Season 10 has received from critics and viewers. Given the data, which is available thanks to various media aggregators, we have seen that Archer Season 10 has received the universal acclaim. On Rotten Tomatoes, the tenth installment of Archer holds a score of 7.33/10 and a 86% approval rating from critics, while the viewers have rated the current season at 3.8/5 and have given a 67% rating. On Metacritic, Archer Season 10 holds a score of 74/100 and 7.0/10, among critics/viewers, respectively. Finally, on IMDb, the animated sitcom still keeps a high rating of 8.7/10 based on over 124,600 votes.

Summing up, everything looked no so bad, talking about the future of Archer, and no doubt, those who were responsible for the decision on renewal have taken all the data above into account. We don't know what caused the panic regarding the cancellation of the show since, in our opinion, all indications were that Archer Season 11 must happen, at least given the data described above. Fortunately, we were right in our forecast and FXX has eventually opted to pick up Archer for Season 11.

As mentioned above, FXX has renewed Archer for Season 11. According to the official announcement, Archer Season 11 release date is slated for 2020. We tend to think that the upcoming premiere might happen next spring, in April-May 2020, given the current schedule of the series.

But still, please bear in mind that the data above is only our forecast. We are tracking down all the information, which arrives from FXX as well as an official Twitter account of Adam Reed, the show's creator. As soon as we receive some certain data on the subject of a specific release date for Archer Season 11, we will update this page. So guys, stay tuned for updates. We will keep you informed.

The story focuses on egocentric self-confident secret agent named Archer, who is working in a fictional New York-based intelligence agency. Archer is an ironic parody at a masculine James Bond like protagonist, who unlike his icon is not so successful in love affairs as well as special skills.

It's Always Sunny in Philadelphia